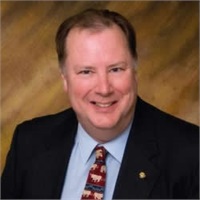 Matt has a Bachelor of Business Administration, a Bachelor of Arts in Political Science and a Minor in Congressional Studies. All three were awarded from the University of Oklahoma. In September 2008, he earned the designation of DTM* (Distinguished Toastmaster), the highest designation awarded by Toastmasters International. Currently he is very involved in several civic and community associations including:

Matt has been married to Tracy since May 1979. Tracy has worked in the University of Oklahoma Athletic Department since January 1980. They have three children Kyla, Erik and Bonnie and six grandchildren.

Kyla graduated from the University of Oklahoma with a degree in Public Relations. She is currently the Director of Development at the Women's Resource Center. Kyla married Jason McMoran in June 2003. Kyla and Jason own a property management firm and Pizza Peddlers in Noble, OK. They are the parents of Owen and Luke.

Erik is an apprentice electrician with IBEW Local Union 1141. Erik married his wife Haley in June 2014. They are the parents of Austin, Izak and Sofi.

Bonnie is also an alumnus from the University of Oklahoma with a Bachelor of Science. She works for Boeing under the BDS ETS&S program. She married her husband, Jay Branstetter in July 2017. Jay who holds an Associates of Business Administration Technology degree and currently works for Chickasaw Nation Industries. They are parents to BreElla.

Both Tracy and Matt are actively involved in the community in a variety of ways. He feels strongly about giving back to his community every chance he gets, as well as setting a good example for his children and grandchildren.

*The above designations and licenses are credentials only and are not an endorsement of services by the issuing bodies.